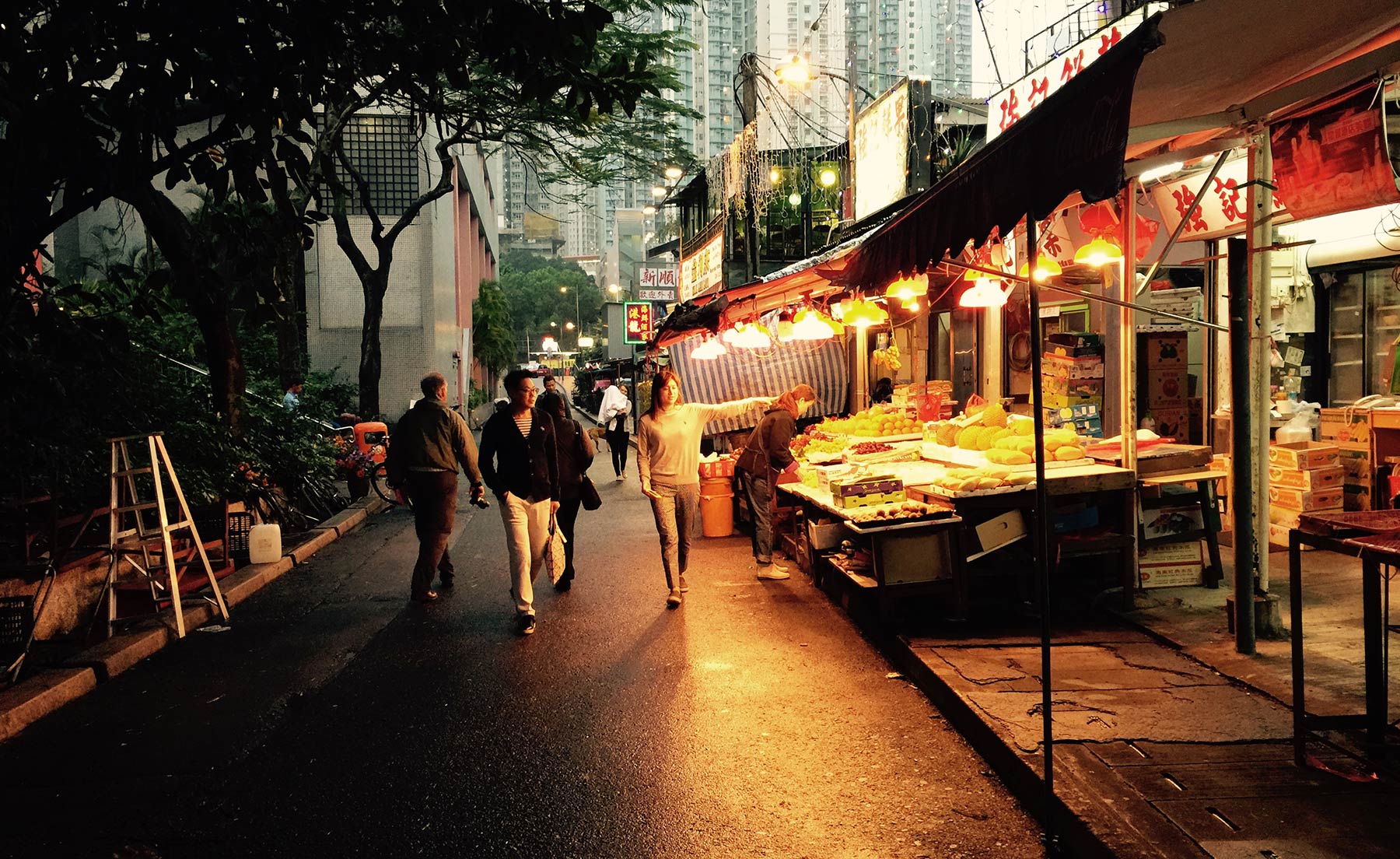 A village surrounded by the city. An island in the South China Sea. Farms and Chinese traditions along the border. Hong Kong has it all. Discover our city’s far flung secrets on a custom walking tour with us.

Hong Kong is, as one local architect writes: “a hyper-dense skyscraper forest located at the bottom of a mountainous jungle.” On walks further afield, we will introduce you to the unusual, the remarkable, and yes, even the un-glamourous but important places, like our justly renowned system of public housing estates (where nearly half of Hong Kong’s people live).

Far from the crowds

We’ll take you to stroll along the lesser-trafficked areas of our harbourfront, to markets “hidden” inside concrete warehouses, to the ruins of ancient villages in the middle of an urban area. And we’ll also take you to parts of our city where you won’t believe you are still in a city.

Shau Kei Wan and Lei Yue Mun, two former villages at the far eastern end of Hong Kong island, are places that even many Hong Kong people don’t know all that well. Ever since the night we accidentally walked past Lei Yue Mun’s gauntlet of touristy seafood restaurants and into the REAL village hidden beyond, it’s become our firm favorite short “break” from the congested downtown.

Shau Kei Wan has Hong Kong’s most splendid and photogenic outdoor vegetable, fish and meat market. Around here is a 40 year old cafe that serves the best fish ball noodles in the city, to overflow crowds. This is one of the few places in Hong Kong island where you can walk right along the edge of Victoria Harbour.

About our stunning harbour…

It’s the world’s best and most beautiful. In fact, as you’ll find out on this walk, if it were not for Victoria Harbour, there wouldn’t be a Hong Kong.  The British leased it from the Chinese because they knew it was one of the most extraordinary deep water ports in the world. By the end of the 1800s, the city became Asia’s great entrepot (love that word!), the trade powerhouse of the Far East. That heritage is something you can still see and feel, here at the water’s edge, watching fishing trawlers, container ships, and massive cruise liners ply this very-much-working waterway.

We’ll cross that magnificent harbour at its narrowest point in a small rustic ferryboat. And on the other side is an 80 year old former stone-cutters’ village. No vehicles are allowed in that village, which is so authentic-looking that the last time we were there, a Hong Kong film crew had set up make a movie set in 1900s Hong Kong. With afternoon light streaming down, reflecting off the water, you’ll feel transported to another place and time, and you’ll hardly believe the downtown skyscrapers are only 30 minutes away. 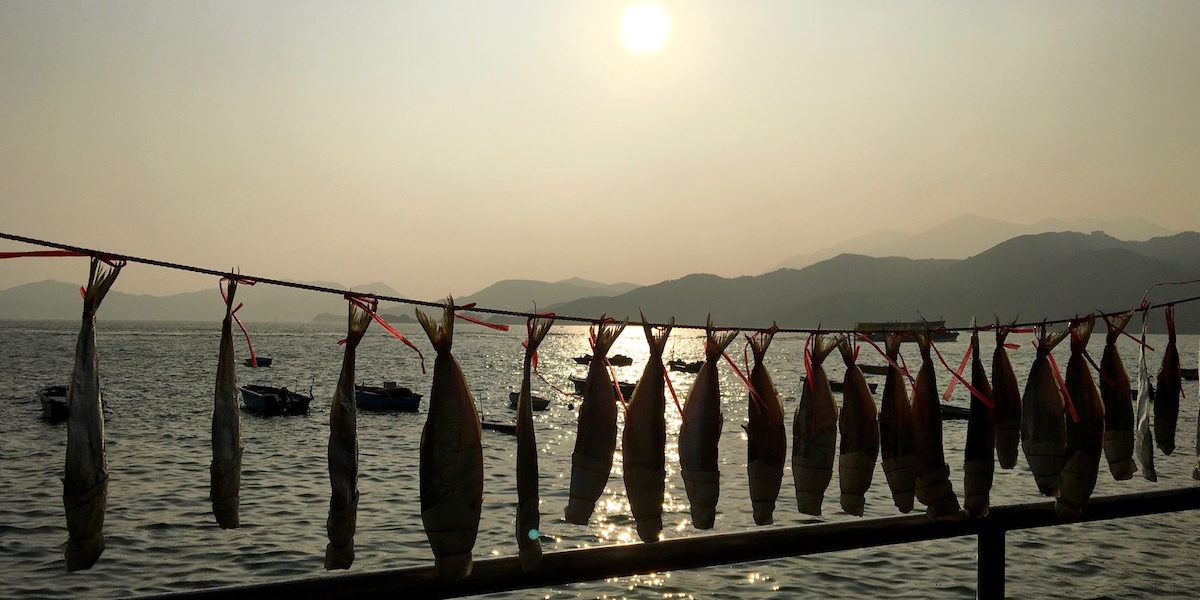 The city of Hong Kong includes 240 islands, and we’ve spent the last year scouting to find the most magical one. And at last, we did.

Tiny Peng Chau is only a third of a square mile, but it feels much larger because it is packed with history, beauty, wild natural scenery and one of the coolest little small towns in Hong Kong.

Oh–and did we mention the food? Hidden in the lanes of Peng Chau is one of Hong Kong’s best humble family restaurants. You’d pass it by if you didn’t know it was there, and even many Hong Kong people have never heard of it.

For five hours, we’ll take you away from the noisy city. Step off the boat, onto our magic island. Ahhhhh.

We’re off on the rolling sea!

The jaunt begins in Central where we catch a regularly scheduled ferry to the island–only 25 minutes. The path leads straight across Victoria Harbour, and we’ll catch views of the container ship terminal, as well as cargo craft making their way along the Lamma Channel, one of the world’s busiest shipping corridors. Did we mention that the Peng Chau ferry is one of the last in Hong Kong to enjoy an open deck on all boats?

Photogenic? You got it.

The island began as a fisherman’s paradise, became a hideaway for pirates and smuggles, and eventually a center of Hong Kong manufacturing. In its heyday, Peng Chau made most of the matches in Southeast Asia! There are traces of all these pieces of history on the island, plus 5 gorgeous small Chinese temples, and a long seaside promenade for strolling (a rare thing in Hong Kong!)

Unlike other more well-known outlying islands, Peng Chau does not have “sights”, famous huge festivals, or crowded, smelly fish restaurants for tourists. This is just how we like it! At Little Adventures we avoid so-called attractions in favor of places where you can feel, and often touch daily life.

3. On The Border: From Qing Dynasty to Luxury Towers in the New Territories 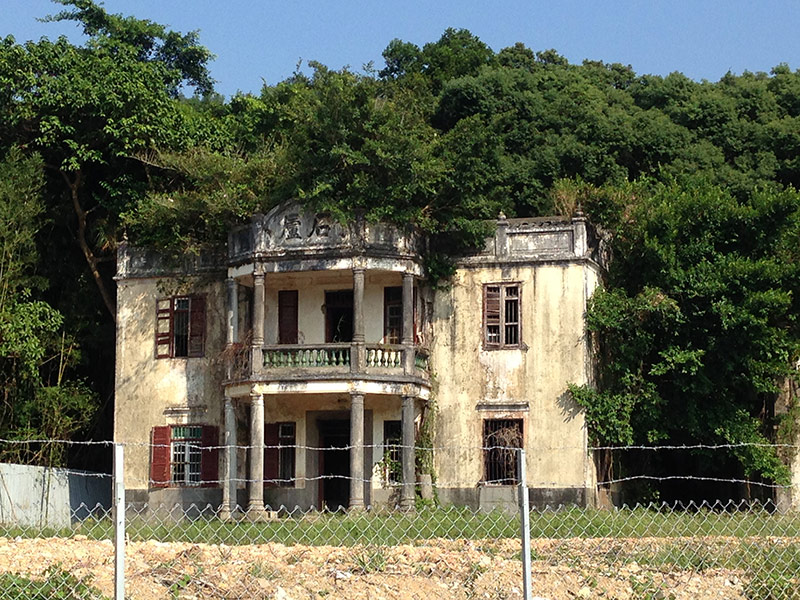 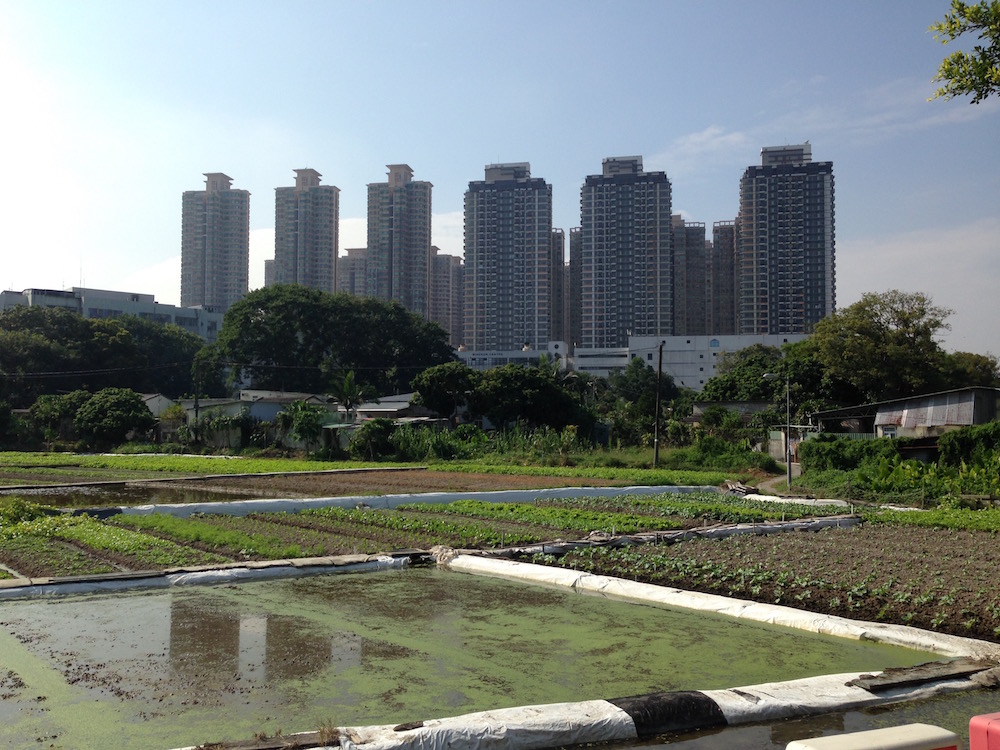 A must for architects, urban explorers, China history buffs…and anyone who is interested in digging deeper into Hong Kong’s urban past and future. We spend a half day roaming Fanling, a still-rural area ten minutes from mainland China, where ancient walled villages, a 100 year old market town, wetlands and farmlands sit uneasily alongside monumental postwar public housing projects, and a new wave of luxury housing development. We’ll take you on a walk that ranges from 200 year old walled villages inhabited by a clan that traces its roots to a Song dynasty princess, to blocks of newly minted high rises. Here in the shadow of a relentlessly globalizing city, you can witness how money and property developers are forever changing Hong Kong’s landscape–and if you’d like to end the day with an amazing meal, we’ll take you to a restaurant that serves food sustainably sourced in Hong Kong!

One of the great advantages of specializing in super-small private walks is that we can customize a program that focuses on your special or professional interest. Urban design. Social structure. Politics, economics, or medicine. Give us a topic, and we will create a walk to highlight your particular interest in Hong Kong.  Our team has created custom itineraries for journalists, doctors, lawyers, economists, diplomats and urban planners.

We also provide targeted services for corporate groups and executives. Our team can create anything from a fun team building event to a laser-focused topical seminar or field trip.

If you’ve just arrived in HK to live and work and would like to learn the ropes, we can help you with that as well. We’ll introduce you to new neighborhoods, build your confidence about striding into local haunts with little English, and teach you the ins and outs of how to shop at the wet market (DID YOU KNOW: you can buy organic and locally grown veggies there that are waaaaaayyyy cheaper than CitySuper, if you can memorize two or three handy Chinese characters. We’ll show you the ropes.)

Like to explore an outlying island, trawl through our wholesale cloth market or walk to villages near the China border? Email and let us know where you’d like to be surprised by Hong Kong.