Posted at 09:21h in Blog, Uncategorized by realtravelhongkong@gmail.com
Share 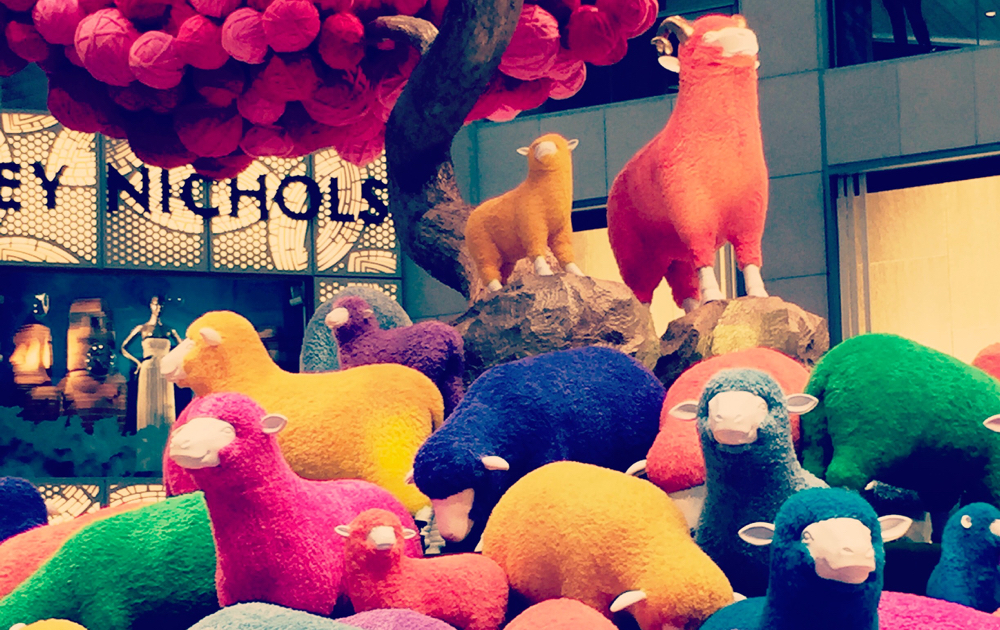 Happy year of the Goat! Or Sheep! Or Ram! Or whatever! The Chinese character (羊) for the holiday’s Zodiac symbol can mean any one of them. At Little Adventures in Hong Kong we have no problem with that–we’re happy to have all our favorite Fuzzy Ruminant Animals around in Hong Kong for this Lunar New Year 2015.

Every year Hong Kong’s stores, malls and shops bring on the major bling for Lunar New Year.  We set out on mission to find the good, bad and the fugly of this year’s Ram-bunctious displays.

Confession: We love the ramp up to Lunar New Year holiday even more than holiday themselves. It’s the time in HK when all the malls and stores go whole hog (um, wait wasn’t that two lunar new years ago?) and wrap their customers in the full-on holiday sensory-consumer decorative experience. This year’s Lunar decorations tick all the boxes you expect for a proper and propitious Hong Kong celebration: huge, ambitious, over the top, major cuteness attack and fun for the whole family. Get your selfie sticks ready, we’re off to review the best Lunar New Year displays in Hong Kong

This year the Chinese Zodiac animal is somewhat open to interpretation, since the Chinese character [ yeung] can be interpreted as ram, goat or sheep. Some of the store displays tiptoe around that fuzzy issue by featuring all three. No such sheepishness from the brilliant designers at Landmark! They’ve concocted a wooly tableaux that not only celebrates the season colorfully, but manages to skate the thin line between cutesy and tasteful. A mountain of multicolored lambs nestle around a giant cherry tree, where round red balls of yarn cleverly stand in for fuzzy spring blossoms. Above, puffy lambswool clouds suspended from the mall’s atrium ceiling slowly rise and fall and rise. Clever and classy, the display’s designers show they have the, uh, chops of the best New York City Christmas window designers. 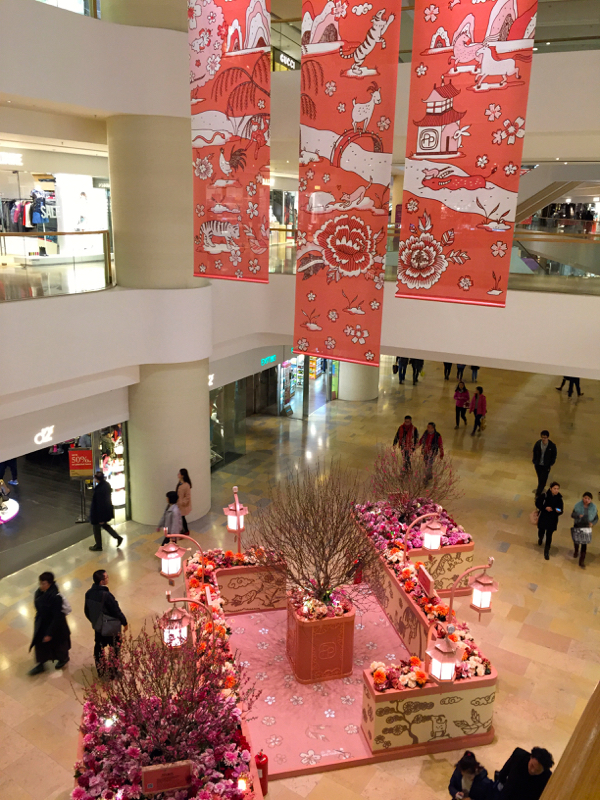 PP’s designers go with the goat this year—but that’s the only clear message in this ambitious but ultimately disappointing display. I love the simplicity of hanging Chinese scrolls in the atriums—Pacific Place always has pretty good taste in their seasonal decorations—but at ground level there’s a chaos of Hello Kitty-pink animals and pagodas spreading like a kawaii attack across the mall. Placards, contests and Lunar New Year riddles connected to QR codes that need to be scanned to win prizes—my head was spinning with confusion, and that was BEFORE I got trapped in the wavy-mirror Hall of Goat Maze.

You gotta hand it to “Yat Bun Seng”, Hong Kong’s favorite cheap  housewares chain: they know their market and they always know what time of year it is. Come December, they’ve got the space heaters and the electric hot pots out front; come January/February, it’s the mops and brooms surrounded by festive lai see and cardboard gold ingots. Because all Hong Kong knows that you gotta clean your house up properly at New Years before you can “clean up” with a fresh slate in the Goat/Sheep/Cloven Foot Animal Year. JHC’s modest—even minimalist—approach to the Lunar New Year holiday display nevertheless resonates in the soul of every Hong Konger. 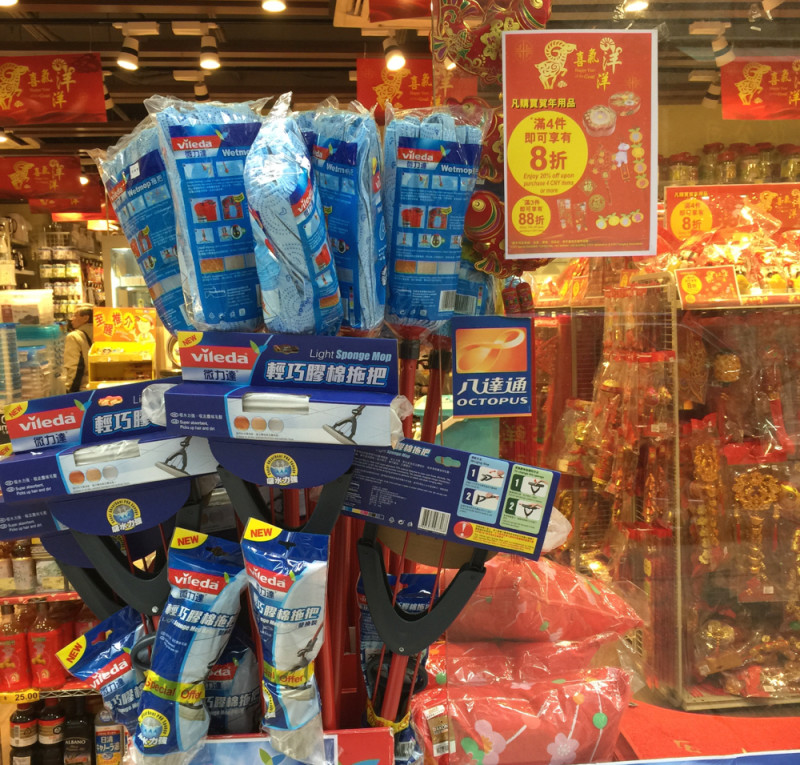 You can count on this strip of “Death Paper Goods” shops to deliver a major Lunar New Year visual statement. Why? Because at this festive time of year, nobody wants to have anything to do with these shops’ unlucky and unfortunate wares (paper offerings for the ancestors). So the idea here is to hide all the paper IPads, Hell Money and paper Gucci loafers behind a wondrous wall of red and gold firecrackers and big-eyed cartoon lambs.  By energetically working to make their customers forget what kind of business they REALLY do, the Funeral Paper Shops succeed in keeping old school “Faat Choi” spirit alive. There is so much bling on this block you need to bring sunglasses. 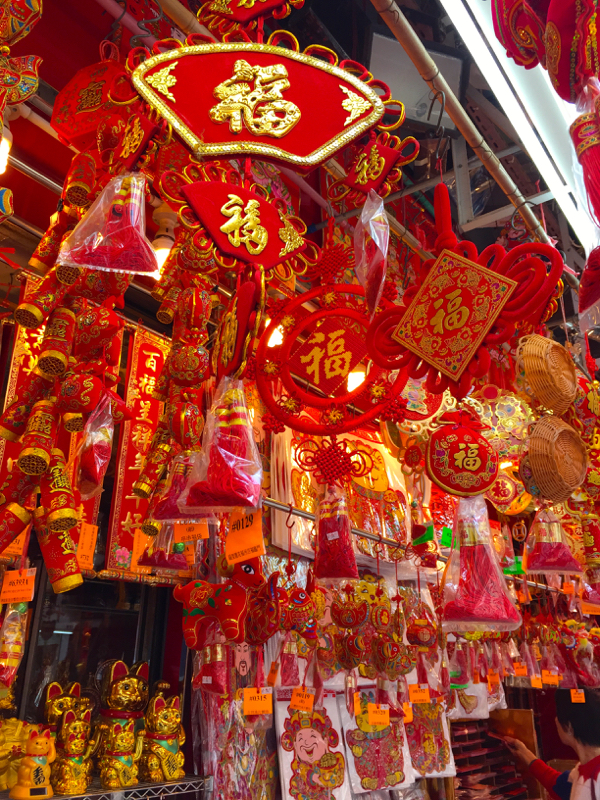 TIE! Landmark and Japan Home Centre. Landmark’s display is smart, clever and sophisticated, while JHC is pragmatic and no-nonsense get the job done. Taken together, the essence of what we love about Hong Kong—at Lunar New Year, and all year round!